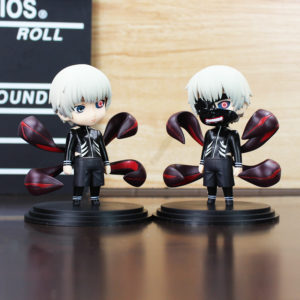 Whether you’re an anime fan or a newbie in figure collection, thinking of the first anime figurines that you’re going to buy is as hard as choosing what anime’s you should watch the next season (except if there were only a few good anime’s to be released). If you badly wanted to buy an anime figurine but can’t decide on how you should go about it, then, this article is the right one for you!

You might have heard of this phrase in one way or the other while researching for the right anime figurine for you. This phrase is actually more on the imaginative side than the realistic side. “Then, what should I do?” You might ask.

On this article, you’ll not only find the right anime figurine for you, you would also encounter the types of anime figurines that would fit your budget and propel you forward on creating your own collection!

Types of Anime Figures you should know:

These are probably the cheapest anime figures that you can buy since they use less materials and are 2D. The upside is that they’re very detailed and they’re small you can display it anywhere, be it your office desk or your study table at home. You can also bring them anywhere without people being suspicious since they are not that noticeable. Their maintenance is low as well, since you don’t need to clean nook and crannies because it’s just 2D; just a simple wiping it with a handkerchief is enough to maintain it. The downside, however, is that you won’t enjoy your anime character’s 3D figure. But hey, if you wanted to just look at it on the front side and not on the sides, then this is the right anime figurine for you!

These are the second most expensive anime figures that you can probably get. They’re available everywhere, from third party sites, online shops, and official anime merchandise stores. Unlike the Acrylic Stand Figures, these ones are as 3D as you could get. From Sasuke’s rasengan to Goku’s kamehameha, you can look at it close-up and admire it’s awesomeness! The upside of this one is that you can admire it’s 3D-ness and even use it as a template if you’re planning to write your very own manga or comics. They could also be displayed in a glass cabinet so that your visitors can admire your collection (unless you’re overly-possessive and you want your anime figurine for yourself lol). The downside is that you probably wouldn’t be able to resist on touching it all the time and admiring it (making you lose some of your precious time and making the figurine dirty as well, I guess). The maintenance for these kinds of figurines are also high, if you want to keep it on prime condition, that is. Here is an example of our action figure product.

Much less expensive than action figures but sometimes more expensive when they’re collector’s items. They are smaller than action figures but the details are high-quality as well. The pros and cons for this one are almost the same for action figures except for the fact that you can cram a lot of these ones in a single glass cabinet than action figures, They’re also portable but don’t bother putting it in your pockets since it might damage them. (I don’t know why some people bring it with them, probably for good-luck, I guess?). Anyways, if you’re not into bad-ass looking figurines and more on the cute-side, then these figures are the right ones for you! (Check out our chibi figure product)

These are the most common figures due to its popularity and they’re cheaper than regular priced action figures. This is probably the easiest figures to collect since they’re common. It’s pros and cons are pretty much the same with chibi figures. If you’re not into chibi-cuteness but still want some cute figures, then this might be the right figures for you! (Click to see one of our Funko Figure product.)

This type of anime figures are rare to come by, especially because you can win most of them in crane games in japan. Fortunately, there are online shops who managed to get these items on the market. These figures are made of durable material and doesn’t easily break. Because of that, they’re cheaper, and the most ideal figures to be collected.

(*please refer to the action figures for its upsides and downsides)

In any case, if you’re into 3D action figures and you want to buy cheap but high-quality ones, then this type of anime figure is for you!

This is probably the most expensive, and I mean, the most expensive figure that you can get a hold of. A wide-range of these figures are collector’s items with the cost ranging from action figures prices to hundreds of dollars. The downside of these types of figures is that it can leave you bankrupt, I mean, totally! (Especially if you’re just a high-school student relying on your monthly allowance and part-time work). They’ll also get admired by your visitors at home (admired a lot!) and they’ll be tempted to touch it. These figures are also too awesome to look at that you might spend days looking at it (probably not unless you’re daydreaming lol) and it’s maintenance is high in order to keep it on prime condition. On the other side, the upside of these figures is that you can brag about it to your fellow anime lovers. You would also feel rewarded after buying it since it costs a lot of your blood sweat and tears (lol). If you’re planning to buy these kinds of figures, make sure to have a keen eye for discounts and sales. If you dream of becoming a hard-core anime figures collector, then this type of figure is recommended.

Still couldn’t decide on what to buy? These few tips can help you out!

Yes! This is the most important thing that you should think about before buying any type of figurines. Make sure that anything you buy falls under your budget so you won’t regret it later on. It’s fun to buy anime figures once in a while but make sure you enjoy it and not get debts later on.

This falls on the category of huge fans of anime. Once you get to know your own art style, choosing your very first anime figurine would be really easy. If you don’t know your art style yet, then go watch more anime’s (but make sure you keep the balance in watching :))

This is the second most-important tip that you should know when you’re planning to buy your very first anime figurine. Some people just buy on the fly and almost all of them regretted it later on. Always remember that buying an anime figurine is like entering a battle-field. Let your guard down even once and you’ll lose your precious credits. Make sure you lay-out a foolproof plan and strategic tactics so you won’t get tempted to buy on the fly. I advice that you do some window shopping for your anime figurine and then once you find the one for you, then go get your money and stick on a hit-and-run tactic. I’m not exaggerating, this happened to me in real life and I’m just imparting my own strategy so you won’t fall in the traps of temptations (This is a battlefield!)

This is the final resort that you can do if you don’t have any choice. Better yet, go canvas with them and ask them for your opinions. If your friends are like-minded people who has the same tastes of anime like you, then chances are, they know your art style better than you do. It wouldn’t hurt to take their opinions in consideration and you might be able to choose faster and more wisely with them than by yourself!

This should be on the “Don’t forget to canvas” section but I decided to separate it since it’s as important as the others. Just as I mentioned, buying an anime figurine is like entering a battle-field. Watching for discounts and sales might not actually lessen the temptation of buying on the fly, but it’s quite useful on strategizing. This is actually the next step after knowing your budget. Once you’ve done this, you’re only a few steps away in buying your very first anime figurine!

And that’s it! I learned these tips based on experience and I have imparted it to you! If you’re still unsure on what to buy, just continue on window-shopping and canvassing until you find the right one for you. Once you buy that very first figurine, it won’t be long until you’ll be able to fill that bookshelf with your figurines!

All the best in collecting!